Japanese language learning materials have been migrating to the web in various forms including online courses, blogs, mobile app and videos to name a few. However, I still have some personal recommendations for great text books I have used to study Japanese in the past on my own and then at university as part of my degree. So, if you want to widen your repertoire of resources for learning Japanese and are tired of starring at a screen, these might be of use. Check out my personal list for the best text books for studying Japanese.

1) A Dictionary of Basic Japanese Grammar. 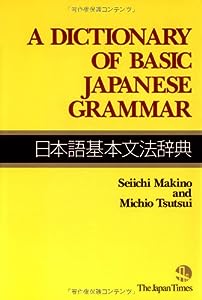 If you are looking for something that is head and shoulders above the competition in Japanese grammar books, I would go for A Dictionary of Basic Japanese Grammar

published by the Japan times. These are thick books crammed with example sentences and well written explanations. If you are a complete beginner to the language and are looking for something to aid your Japanese class or prep for the JLPT, then this dictionary will be good for you. My personal favorite is “A Dictionary of Intermediate Grammar” as I think has best coverage of the language and is good for low intermediate to advanced students. Unfortunately, the Intermediate version seems to be unavailable on the US Amazon site. Why Amazon, why? Get “A Dictionary of Intermediate Japanese Grammar” here on the Japanese Amazon website. 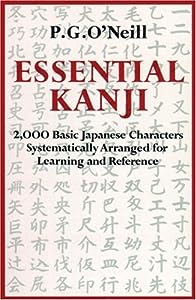 There are a lot of Kanji learning texts out there including Kodansha”s “Kanji Learner”s Dictionary” and “Kanji Pict-O-Graphix” to name just two. However I prefer Essential Kanji: 2,000 Basic Japanese Characters Systematically Arranged For Learning And Reference

by P.G O’Neil mostly because of its simplicity and clear layout. It covers 2000 essential Kanji which roughly mirrors the Joyo Kanji, the standardized Kanji for basic literacy in Japanese. Each Kanji has examples written in both beautiful calligraphy and ballpoint pen including the stroke order.

The slight downside is some of the sentence examples can be a little esoteric and not used in daily life. I have got a few puzzled expressions from some Japanese people I have shown this to. However, most of the sentence patterns are OK, just try to check what is most commonly used and you’ll be fine.

Apart from that minor problem, I would recommend this as a nice, straight forward, compact dictionary for people learning Kanji.

is a great reference guide for useful Japanese verbs and tables on how to conjugate them. Again, there are many good verb references out there in print form and on the internet, however I like it as it is easy to understand and use.

One thing you should be a little careful with is table layouts as  they suggests that the frequency of all verb conjugations is equal. Of course, you won’t use absolutely every single conjugation in this book in, say, everyday natural conversation.

However, this is only a small concern and if you keep that in mind and have an idea of how these verbs are used naturally in conversation and in print, then this is a great book to get.

I have warm and fuzzy memories about using this book during my very first baby steps in learning Japanese. Sentimentality aside, why would I recommend a book for learning Hiragana when there are so many awesome online apps and websites for learning it (including our very own Kana Invaders Game… immodest cough)?

It’s beautifully laid out and well written. It includes practice sheets for you to try writing your own Hiragana which I would argue you can’t do so easily on a tablet device. This would be a wonderful present for complete beginners to Japanese or even kids learning to write for the first time. You can also check out their Let’s Learn Katakana: Second Book of Basic Japanese Writing

too which is very good.

is a good choice. It’s a classic book used by students of Japanese all over the world and has some nice conversation and grammar examples and explanations.

Avoid the romaji version of this book and go for the Kana version.When starting out in Japanese I believe it is better learn Hiragana and Katakana and drop Romaji as soon as possible as it will just get confusing. Also make sure to get the CD as that will really help you to practice your listening, pronunciation and fluency even if you don’t have a native teacher and are studying on your own. 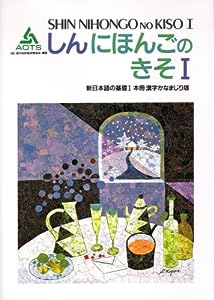 In the same league and type of beginners’ Japanese textbooks, I would also recommend Shin Nihongo No Kiso

which includes great grammar, dialog and vocabulary examples. Much like “Japanese for Busy People”, this is a classic textbook used in universities and Japanese language schools as a solid material for students of an elementary level and upwards. You should note that there are extra accompanying books and materials such as the English translations and CDs if you need them.

Learn Japanese Pod started out in Osaka in Kansai so wanted to get a good book to consolidate my knowledge of the Kansai dialect. Colloquial Kansai Japanese

is a fun book for learning it although it”s better for consolidating what you already know.   I’ve gotten approval from some native Kansai people including Beb who helps me to record my podcasts. I can also start to decipher her heavy accent with this book.

It covers the basic common sentence patterns, verb endings and slang that you might hear in Kansai. It’s pretty simple, logically written and has a fair coverage of the language. You won’t be sounding like a native resident of Osaka with this book alone. However, as a general guide and reference to visiting Osaka and the greater Kansai region, it’s an interesting book to have. 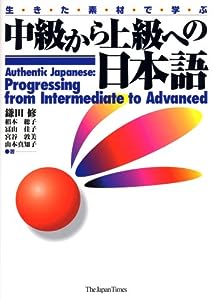 Once you”ve progressed to an intermediate level of Japanese and want to get your teeth into something a little more substantial then Authentic Japanese: Progressing from Intermediate to Advanced

is worth a look. It will mainly help you improve your reading skills but will also boost your general knowledge of Japanese. Arranged in interesting themes it contains various texts with comprehension and grammar exercises, Kanji and vocabulary lists and explanations.

As a text book it’s not too dry and should increase your motivation to continue studying Japanese even for those studying on their own.

is a great compact book which explains those devilish particles that western students of Japanese find rather challenging to master. I like the examples, the explanations and of course the size. It doesn’t waffle and is to the point with the basic information you need for both spoken or written Japanese. Check it out. Another good book by the same author, Naoko Chino, is A Dictionary of Basic Japanese Sentence Patterns (Kodansha Dictionary)

which is worth a look. I should mention two general points about studying particles in Japanese. 1) Remember to not get too bogged down with particles. Along with this book, you should really try to learn particles in larger sentences in natural dialogs. 2) Native speakers often omit some particles from daily speech and colloquial Japanese. So this is a great book to study but don’t get too stuck in grammatical rules concerning particles when you should be practicing daily conversation. 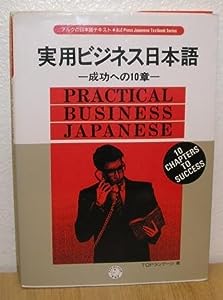 One can only wonder at how anyone could have dreamed up such a horribly ugly cover for a text book. I mean seriously, look at it. It almost makes my eyes bleed and yet Practical Business Japanese

is probably one of the best Japanese text books I have ever used. This is definitely a case of not judging a book by its cover. If you are venturing into the world of Japanese business, and lord help you if you are, then this book is for you. It is crammed full of essential situational office dialogs including levels of politeness, male and female language and a nice light sprinkling of humour. Not only do you have conversations on how to answer the phone but also how to pretend that you are out of the office so you don’t have to. It’s also great to get a handle on learning Keigo or respectful Japanese language.For some reason, I lost this a few years ago but will be buying again as a reference to speaking Japanese in business and other formal situations.

Again, this is not an exhaustive list of all the Japanese text books out there however, I have personally used all the books listed here and thought they were worth their price tag. Also, as I mentioned earlier, although the internet has an increasingly large amount of online apps and websites for studying Japanese, it’s nice to have some dead tree media to pull oneself away from the computer screen. Happy Japanese textbook hunting everyone!