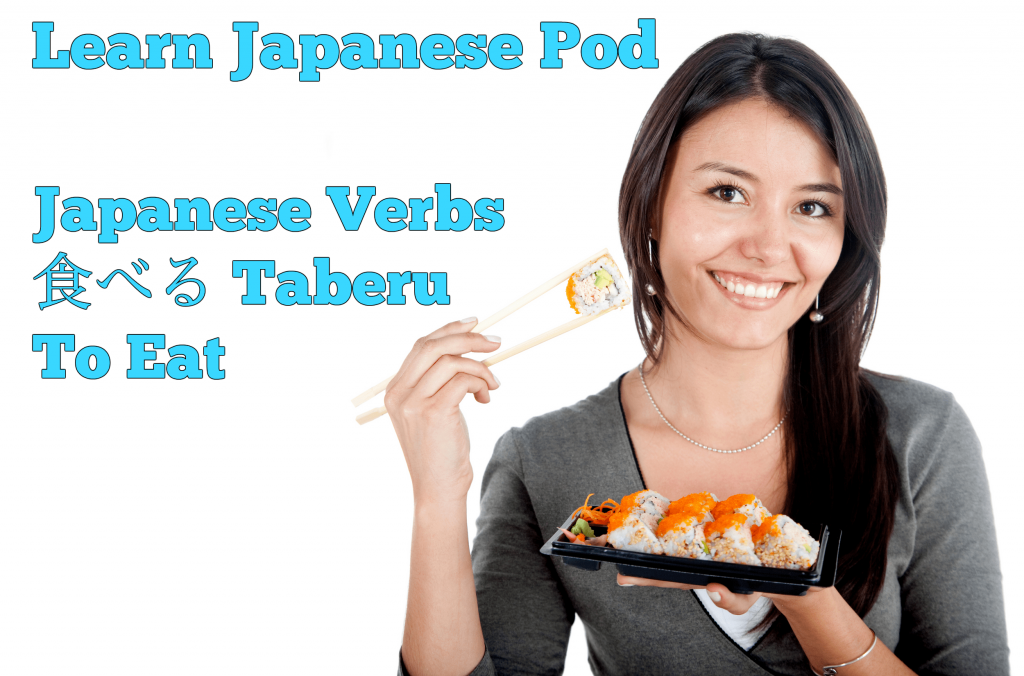 In this podcast, Ami sensei and I teach you about using the verb 食べる in the casual form which is used between people who know each other well in an informal situation. This is how you conjugate the verb taberu in plain form or “dictionary form”.

Rule 1 – You can drop the subject before a Japanese verb

The dialog starts with ね – Ne which means “Hey” and used to get attention to start a conversation. Then the next word is 食べる？ Taberu with a rising intonation. This literally means “Eat?”. One important thing to remember is that you don’t need to use the subject of the sentence as the meaning is understood from the context of the situation. If someone is looking at you and simply says “Taberu” with a rising inflection. You can be pretty sure that they mean “Do you want to eat”? which is what it means in this situation. In fact, this entire dialog is completely devoid of sentences  with the words you or I in them. And this because…

Rule 2 – You have to guess the meaning from the context

As we continue to the next line in the dialog we have  食べない tabenai which means “not eat”. Again, from the context, you can guess this means “I don’t want to eat”. And context is everything here. This aspect of Japanese can make it easier for you to say more with less because minimalism is the key. It can also make it devilishly hard to understand what is being said because if you don’t understand the situation you won’t understand the conversation.

Continuing we have 食べないの？Tabenai no which is literally “Not eat” + のno which signifies a question. This means “Not eat?” or “Don’t you want to eat?”

Next we haveもう食べた Mō tabeta kara – This literally means “Already ate because” or “No because I already ate”. Then 食べなかったの Tabenakatta no – which means “didn’t eat” with the の question marker so “Didn’t you eat?”.

Rule 3 – Yes means no and no means yes

The answer to the question “Didn’t you eat” is うん 食べなかった Un Tabenakatta – Yes, I didn’t eat. This might be confusing as in English you would usually say:

However in Japanese you have to say “Yes, I didn’t eat”. This is because in Japanese, when you say yes, you are agreeing directly with the statement that was just made so you could think of it as “Yes, it is true that I didn’t eat”.

Rule 4 – Verbs ending in ō mean “Let’s do something”

Next we hear 食べよう Tabeyō. This form of the verb is used to suggest or propose an idea. So it means “Let’s eat”. Theよ Yo at the end emphasizes the meaning more. Here are some more examples:

The last line of this dialog is いらいない Iranai – Not needed or more naturally “I don’t want any”. Finally we have 一人で食べて Hitori de tabete. Hitori means one person or in this case by yourself. 食べて Tabete is what’s called the “Te” form of the verb and is an order or request to do something so Tabete means “Eat!”. In this case the speaker is saying, “I don’t want any, you go ahead and eat by yourself”.

What is Japanese plain verb form?

In Japanese, there are various forms of politeness from very direct to extremely polite. Plain form verbs are considered to be less formal and are often used in casual conversation between friends and people of similar social rank in society. When looking up verbs in the dictionary, you will always find the plain form of the verb which is why they are also know as “dictionary form” verbs.

The more formal and polite form is the -masu form which is conjugated for the verb Taberu like this:

The -masu form of the verb is used in more formal situations when to talking to people of senior rank. You will often here service staff use the -masu form of verbs to customers.

When studying Japanese for the first time it is quite common to study -masu form verbs first. This may be because of tradition and perhaps Japanese teachers would rather give you all the polite Japanese first before you go out and offend people with the wrong level of politeness.

This is not necessarily a bad idea and I would advise you to definitely learn polite -masu form verbs. However, in my experience, after studying almost exclusively polite Japanese in my first year of university, I found that around 90% of the conversations I was having was in plain form. That means, if you only learn the polite form, you will have difficulty understanding taking part in conversations and discussions with your Japanese friends, family and even coworkers.

Should you learn the safer polite form or the more plain form first? Great question and I will let that heated debate continue as it always has. Of course, you should learn learn both verb forms.  However learning plain form verbs is your key to understanding daily conversation and being able to speak Japanese more fluently.